How Can We Help ?

Zero-carbon communities and the push to save the planet

In recent years the motivation to reduce our impact on the planet has rapidly accelerated, with groups like Extinction Rebellion making international news and long-time climate change activists calling for immediate action. We already know that the way we currently live causes irreparable damage to the planet, and that something must be done to reduce carbon emissions, the use of plastics and other non-recyclable materials in everyday life and to conserve a better way of living to protect the Earth from further harm.

As individuals and as corporations we all have a part to play in reducing carbon consumption – with the latter, some more than others – but there are some communities who are going to impressive lengths to improve their footprint on the world by aiming to be carbon neutral, or even zero-carbon.

Climate change: what we know

The Earth’s climate has changed throughout history, with glacial advance and retreat, ice ages and cycles of differing meteorological patterns that have largely been down to small variations in the Earth’s orbit. However, the most recent climate change period is more than 95% likely to be the result of human activity, largely since the mid-20th century when industry became big business, leading to global temperature rise, warming oceans, shrinking ice sheets and glacial retreat, rising sea levels and declining sea ice, acidification of the oceans and extreme weather events. Time is ticking to prevent further irreparable damage to the planet. Current global warming is occurring approximately 10 times faster than the average rate of ice-age recovery. As humans, we all have a job to do.

Communities on a mission

The Devon coastal town transitioning to a better tomorrow

Totnes has been billed as a ‘rural eutopia’ since the 1920s – possibly the reason why it has become such a magnet to ‘new age’ communities and alternative therapy practitioners. It was actually named ‘Capital of New Age Chic’ by Time magazine. In 2005, the movement Transition Town Totnes was launched, and there couldn’t have been a better setting for the Transition initiative – an outline which helps communities to create an existence that functions without fossil fuels and a more circular economy. Spearheaded by co-founder Rob Hopkins, the movement resonated well with Totnes residents and gathered pace. Now there are more than 1130 Transition initiatives worldwide, across 43 countries.

The Danish town at risk of flooding

In the far south of Denmark, Sønderborg is almost completely surrounded by water and as such is at risk of increased flooding, from both heavy rainfall and rising seawater along the coastline. As part of its ProjectZero plan, around 77,000 people will benefit from becoming carbon-zero by 2029: this is possible by an ‘aggressive’ shift to renewable energy, like wind turbines, biogas in replacement of oil and natural gas, and enlisting local companies to produce provable plans to reduce emissions by 10% in the first year. Notably, some have already made reductions of up to 45%.

The first carbon-neutral village in Britain

Situated in rural Cheshire, Ashton Hayes is a tight-knit community of approx. 1,000 people. It’s also hoping to be the first carbon-neutral village in Britain, by working together as a community and changing behaviours, enlisting almost everyone in the small settlement to make a difference. Since it started its mission in 2006, the village has significantly cut its carbon dioxide emissions – this is thanks in part to its solar photovoltaic panels, planting tracts of woodland to act as carbon dioxide ‘sinks’, carbon offsetting, changing to green electricity suppliers and educating people in the community on making easy changes at home.

The Belgian city moving towards a more sustainable future

In 2011 the city of Liège in Belgium posed the question: “what if, in one generation’s time, all our food was grown from within Liège?” The seed was planted, quite literally, and the project ‘Ceinture Aliment-Terre Liègeoise’ (in English, The Liège Food Belt), was born a year later. The scheme resulted in 21 new cooperatives made possible by five million euros of investment, including two new farms, two vineyards, a brewery and three sustainable stores, and joined together academics, politicians, farmers and residents in the pursuit of a more environmentally sound future. Some of the cooperatives include a farm growing mushrooms on coffee waste, a bicycle delivery service, fair-trade milk producers and a seed-saving initiative; this is particularly poignant considering Belgium has lost some 100,000 agricultural jobs since 1990. 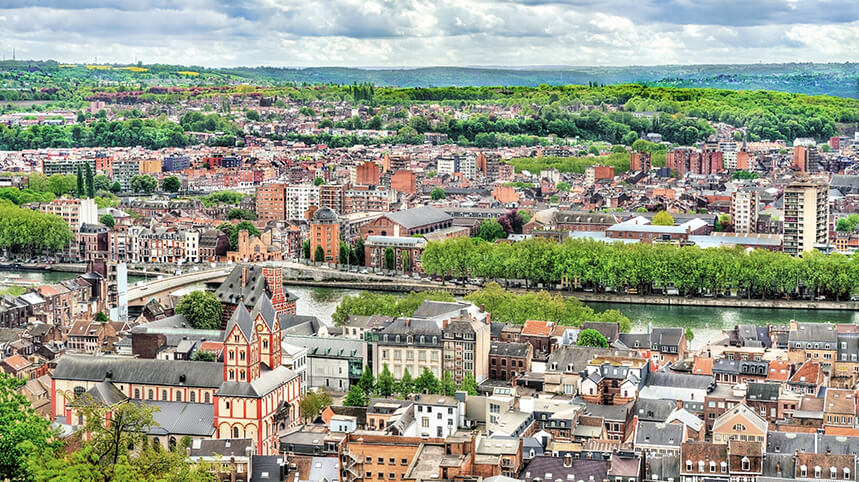 How to reduce carbon emissions at home

Around a quarter of the world’s biggest firms fail to disclose carbon emissions. In fact, it’s thought that just 100 companies have been the source of over 70% of the world’s greenhouse gas emissions since 1988, according to the Carbon Majors Report 2017. While it’s important to hold those accountable, we as individuals and families can play a major part in reducing carbon emissions around our homes. We can all go a long way in the pursuit of carbon-zero.

Here are a few ways to help lessen your footprint on the planet.

The most ecologically sound way of reducing your use of fossil fuels is to generate your own power, using renewable technology such as photovoltaics (solar panels), small-scale wind turbines, heat pumps (ground or air), biomass systems or for larger properties, hydroelectricity. While you’ll still need a traditional source of energy, you won’t use it nearly as much, so you’ll also save money. If it’s not possible to install your own power, consider speaking to your energy provider about moving to a ‘greener’ tariff, or switch provider altogether to an ecologically sourced power supplier like Ecotricity. If you’re really set on changing the way you live, consider the way your house is built too – Huf Houses are one of the most sustainable types of homes, and are growing in popularity.

2. Reduce use of plastics and non-degradable materials

Recycling and using less non-recyclable and non-biodegradable materials is the easiest way to reduce your carbon footprint at home. Almost all local councils recycle plastics, paper, cardboard, glass and tins, and the vast majority also take away food waste too, so it’s possible to only need your refuse collection for those impossible to recycle plastics, like film from food containers. Specialist recycling is also possible for products like Nespresso capsules, which are made from aluminium and can be sent back to Nespresso to be turned into cars, pens and more Nespresso pods. Check the back of every item you intend to throw away to find out if it’s recyclable – there’s a handy guide here. While we’re on the subject of clearing up, also consider the use of greener cleaners – companies like Bio-D promote the use of hypoallergenic, environmentally responsible detergents which have a minimal impact on the ecosystem.

While it’s tempting to grab a takeaway sandwich, head to a fast food restaurant or buy a coffee in a plastic cup, that small choice has a massive impact on the world. Not only is much of the packaging of convenience food non-recyclable, the ingredients used to make it are often produced in a way that harms the planet. The meat industry contributes hugely to greenhouse gases and welfare standards are not always regulated: while the UK’s welfare laws are better than most, you could be buying chicken in Britain that was reared and slaughtered elsewhere, where the welfare standards are much lower. While we’re not saying everyone should go vegetarian or vegan, taking greater care over where you buy meat (for example, from smaller, local producers) is the best solution. In fact, buying local across the board is another way to ease your impact: look out for greengrocers and farm shops, and try to buy organic if possible.

The fashion industry is another huge contributor to pollution – in fact, it’s one of the most polluting industries in the world. Fast fashion dominates the industry, and retailers like Topshop, ZARA, Primark and H&M translate designs to the shop floor in a matter of a few weeks, putting a huge strain on resources. In 2014, the average person owned 60% more clothing items compared to the year 2000, at the same time wearing those clothes for only half as long before discarding them. While not an ecological impact, many of these ‘fast fashion retailers’ still use sweatshops. Look to streamline your possessions, not just your wardrobe. Only buy what you need and buy better. Spending a little extra money on something made from natural materials (merino or linen over polyester, wood over plastic) often means its lifespan is increased. Look for retailers that sign up to 1% For The Planet or use Bluesign-approved factories. And when you wash your clothes, use a Guppy Bag to collect discarded polyester fibres which end up in the water system.

5. Travel with a conscience

As well as helping with fitness, ditching your car for a journey burns fewer fossil fuels. If you can, try commuting to work or the shops on foot or using a bike or public transport, and question if your trips are truly essential – can you group errands into one journey, or share a ride with family or neighbours? If you’re buying a new car, second hand is great, but have you considered a hybrid model? Electric charging points are now widely available around the country, so charging is less of an issue than it used to be.